It’s late May, and I’m out walking in my neighbourhood on the day before a council clean-up. Abandoned household objects line the streets: broken drawers, battered lounges, tired whitegoods. A clumsy catalogue of life detritus on display to all who pass by.

The red-brick apartment block I can see from my window has its own pile out front. Among the discards are several neat stacks of magazines. Passing, I glance at the closest cover; to my surprise, it’s in Japanese. I look at the others. There must be at least seventy magazines in total, and they’re all Japanese. In six years of living in this suburb I’ve never noticed a Japanese neighbour. How have these traces of Japan come to arrive here, in this pile of forsaken objects, on the streets of inner western Sydney?

I’m conscious of invisible threads connecting me to the unknown magazine reader, with whom I share Japanese literacy (albeit sometimes faltering), whose apartment block I can see from my own, and whose path has almost certainly crossed, unnoticed, with mine in the process of going about our daily local lives. I venture back later that day and the magazines are gone. Perhaps someone else who reads Japanese has picked them up, speaking to yet more invisible threads linking both the magazine reader and I to another unknown Other in the neighbourhood.

It’s quiet traces like these that Japanese Australian artist Mayu Kanamori illuminates in her work: the ways that the pasts, presents and futures of disparate people connect, ever so subtly, at that grainy boundary where the everyday becomes a story, and a story becomes the everyday. Mayu’s latest project, Untitled.Showa, is no exception.

Untitled.Showa is an online exhibition of what appears to be a collection of family photographs which takes the unusual angle of asking viewers to assist in identifying the subjects. The project was born when Mayu, by chance, came across several bags of photographs from Showa-era Japan at a market in Geelong. They had arrived in the seller’s hands from an unknown deceased estate, with no hard clues as to who the subjects might be, where they are now, or how their likenesses emerged in a time and place so at odds with when and where they were produced. Moreover, there is no suggestion of an Australian tie in any of the images, compounding the mystique. Untitled.Showa represents a quest to return the photographs to a rightful owner, and in the process to unravel the day-to-day tangle of invisible threads that somehow tie pre- and postwar-era Japan to present-day regional Victoria.

As such, Mayu considers the photographs first and foremost as objects. It is their links to place and time, both then and now, that produce the twin pulls of poignancy and possibility around which Untitled.Showa is formed. More specifically, it is the disjuncture between the time and place of their creation in the private sphere and the time and place of their emergence into the public realm, newly orphaned and transformed from mementos into commodities, that was the project’s starting point. Where the endpoint will lie remains to be seen. But for now, the photographs have done well to find Mayu: they could not have hoped for a more respectful custodian.

It’s a strange feeling, looking through these photographs in a public forum. We know neither the people nor the places, but nevertheless the images are familiar terrain: beachside happy snaps; commemorations of family gatherings; children coming of age; new babies and proud parents. Holiday photos seem to be frequent, yet the absence of touristic trophy shots of landscapes and landmarks is notable. There is care evident in the untiring focus on faces over places, and the mix of spontaneity and intention. It suggests that these photographs were personal, private objects made for sharing with an inner circle of close contacts, for the then-present and for posterity. However, as often happens, the trajectory of these photographs has not moved according to plan. The once-imagined connection with posterity has been ruptured, leaving behind a lingering pathos as those warm smiles face out into a vacuum, an audience of strangers. We can’t help but feel sadness for them, these lost things. 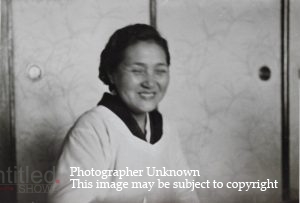 The sense of intimacy conveyed by the images is one of the most captivating aspects of the Untitled.Showa exhibition. A few photos in particular stand out, the handful telling the story of the whole. In #017, the mischievous giggle of an older woman is matched with a blurred focus, a likely artefact of the photographer laughing together with her at the same joke, happily unsteadying the camera. The woman’s white work apron and the fusuma doors behind her mark the domesticity of the scene. Unlike many of the other images in the collection, here there’s no static pose nor celebration finery, no clear occasion being commemorated, no holiday or workday best being worn. This photograph instead memorialises the warmth of the relationship between the photographer and the subject in the context of the everyday. #189 is similar in its domesticity. A young woman looks up from reading a magazine, simultaneously bashful and good-naturedly defiant. Her steady eye holds the eye of the photographer, who returns the steadiness with a firm focus in the shot. There’s a palpable intimacy here too; this photograph captures one side of a mutual gaze that was shared with a trusted counterpart, not posed for an outsider like you or me. 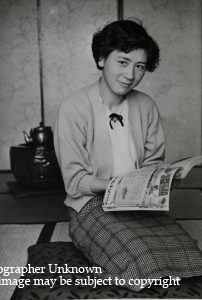 Not all of the photographs represent everyday moments. Many are tied to a clear occasion—a holiday, a family gathering. Many are posed: moments of choreographed stillness, disrupting the occasions they are intended to memorialise and thereby becoming occasions in and of themselves. But even so, the sense of occasion does not necessarily make them any less intimate. In #191, a teenage girl dressed in finery stands tall, hands clasped in front of her, on a gravel road. The contrast between her formal dress and the informal setting is surprising. She is seemingly on her way to a formal event, but rather than memorialising the event at the destination itself, the photographer has chosen instead to take this photo on the journey there. On the quiet road, the camera is free to focus on the girl alone, with no unknown others to distract or clutter the frame. There is undisguised happiness on the girl’s face and her straight white teeth show in a broad sunny smile, flouting the conventions of formal photos where smiles are rare and teeth are generally not shown. Despite her formal clothing, the image is less about the occasion itself than it is about capturing the girl’s glee in response to the occasion, and the joy and anticipation she no doubt shared with the photographer as they made their way to their destination together. 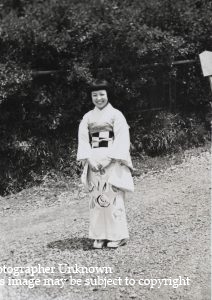 Plenty of others are similarly eye-catching in their intimacy: a woman smiling broadly as she holds a small child in #103 and #104; a couple posing somewhat shyly in #271; and the young women in the Daiei Studios series, their linked arms displaying an affectionate camaraderie. Cataloguing these brings to the fore a second striking aspect of these photographs, which is that they primarily feature women and children: arguably the core of family life, yet often written out of history. In the attention they give to women of multiple generations—and particularly to women as mothers—as well as children, these photographs speak to a gap between the kinds of images and stories that tend to be preserved and highlighted in public fora, and the kinds of images and stories that are central to our daily lives. 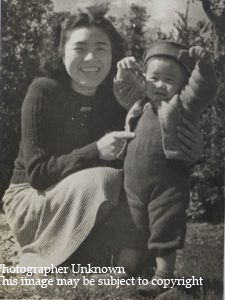 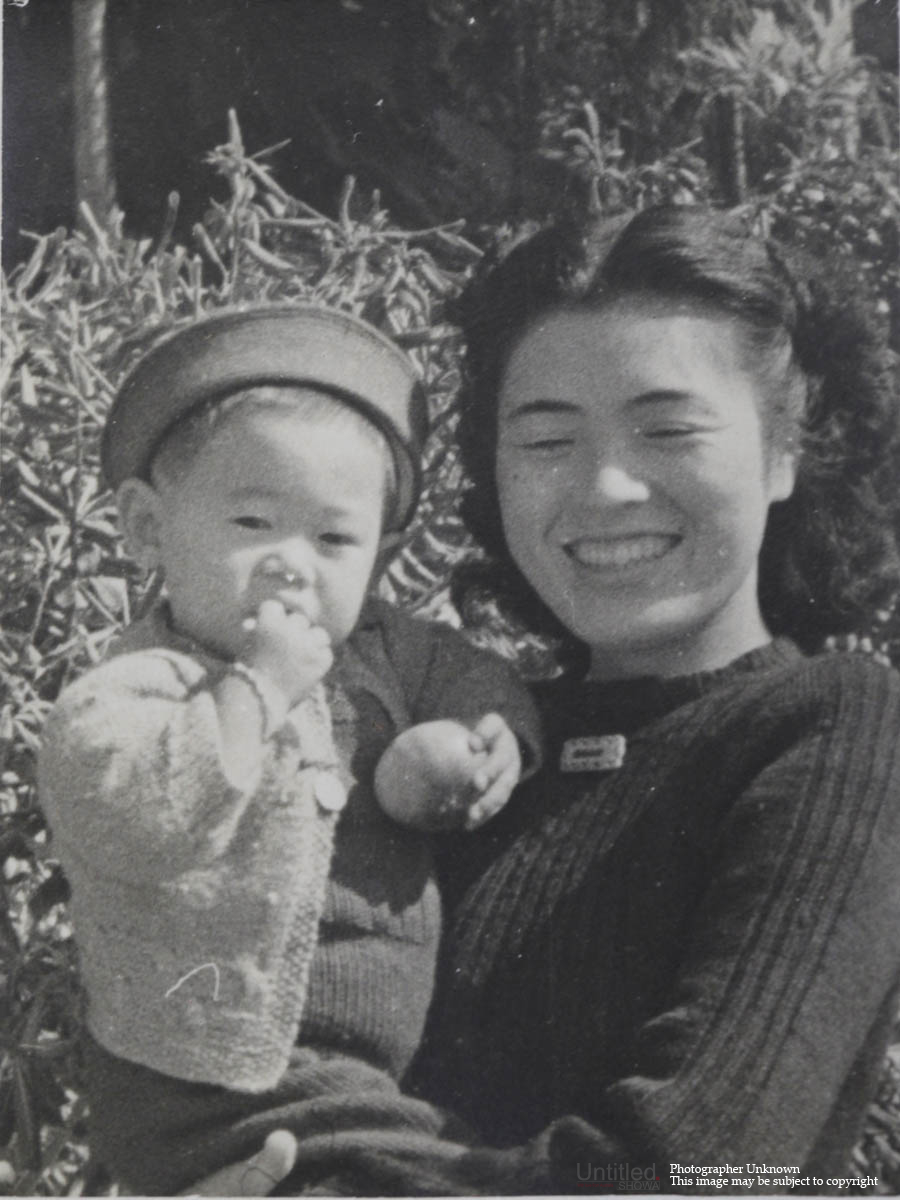 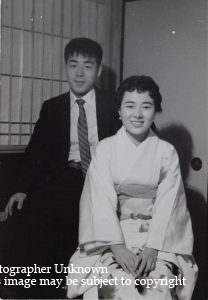 Family photos spend most of their time packed away, hidden in dusty boxes that are rediscovered when we move house, or saved in external hard drives tucked away in poky corners of unused drawers. Perhaps the Untitled.Showa photos are being viewed now more than they have ever been. Perhaps they are more complete with an audience, even if the audience is not the familiar eye for which they were intended. Perhaps no rightful owner will emerge, but perhaps that won’t mean the end of this story, because there are invisible threads that now tie us, too, to these photographs. Perhaps in reminding us that somewhere, in a closet or garage, our own family photos exist, and perhaps in inspiring us to revisit and share them with our own inner circles while we can, they have already fulfilled their destiny. 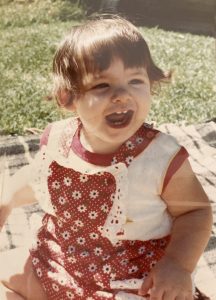 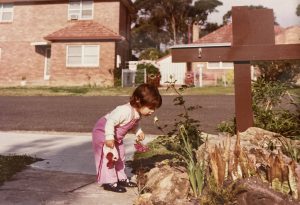 Elicia O’Reilly is series editor of the journal New Voices in Japanese Studies and a cultural programmer at The Japan Foundation, Sydney. She has produced exhibitions, talks, story readings and roundtables on themes as diverse as Japanese tattoo, horror manga and the supernatural, gender and student mobility, and has also programmed events for the Art Gallery of NSW. Her personal and professional connection with Japan spans twenty years, eleven of which she spent in Japan working for organisations including Tokyo National Museum and Toyota. She has degrees in literature and communications, and prior to her current role has worked as a publicist, writer, editor and translator.

This site uses Akismet to reduce spam. Learn how your comment data is processed.